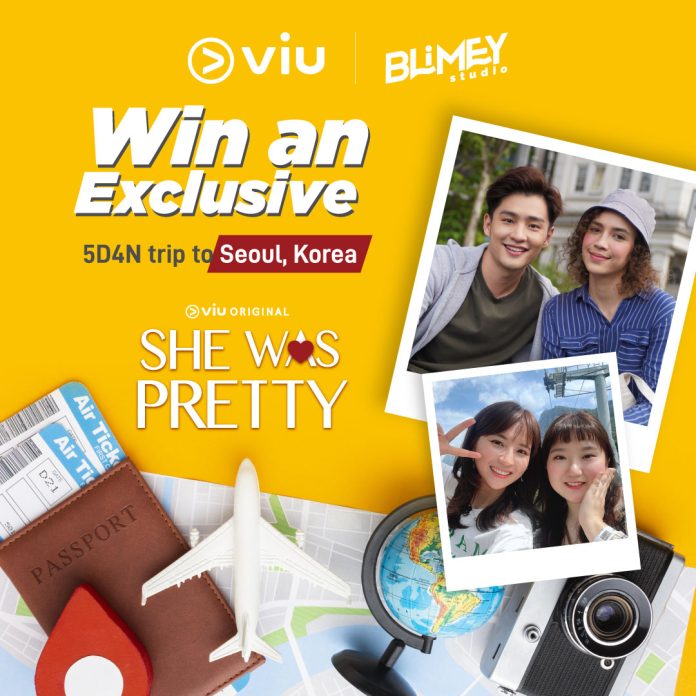 KUALA LUMPUR, 30 June 2022 – If you have been following the recent hype about Viu Original’s latest series, She Was Pretty, then you might want to start planning a 4D5N trip to South Korea!

The contest, announced by Blimey during the Viu Original drama’s launch event at Tropicana Gardens Mall on 21 June, will see two lucky pairs win a trip to South Korea, accompanied by She Was Pretty cast members Diana Danielle and Alvin Chong and the Blimey team!

All you have to do is follow the official @ViuMalaysia and @BlimeyToYou Instagram & TikTok accounts and watch out for the selected scene of She Was Pretty for the week.

Post a video of yourself re-enacting or parodying the selected scene on your Instagram or TikTok account, with the hashtags #SheWasPrettyMalaysia and #SheWasPrettyContest and don’t forget to tag @ViuMalaysia and @Blimeytoyou.

Access and fill the contest form which you can find here or from Viu Malaysia’s Instagram account with your personal details and link to your video submission, along with the slogan ‘Saya nak bercuti di Korea bersama BLIMEY, Diana Danielle dan Alvin kerana….’ with no more than 15 words.

These instructions can be found in a video by the Blimey crew here.

Contestants with complete entries every week, with creative videos and interesting slogans will get a higher chance of winning. This contest runs from 30 June till 28 July.

The Malaysian adaptation of the She Was Pretty Korean drama starring Diana Danielle, Aiman Hakim Ridza, Alvin Chong and Daniella Sya, is currently streaming on Viu, with two episodes every Thursday, before three episodes released during the final week.

Viu-ers will be able to watch the series on the Viu app, which is available for free download on App Store, Google Play, Huawei App Gallery and selected smart TVs, as well as on the web at www.viu.com.