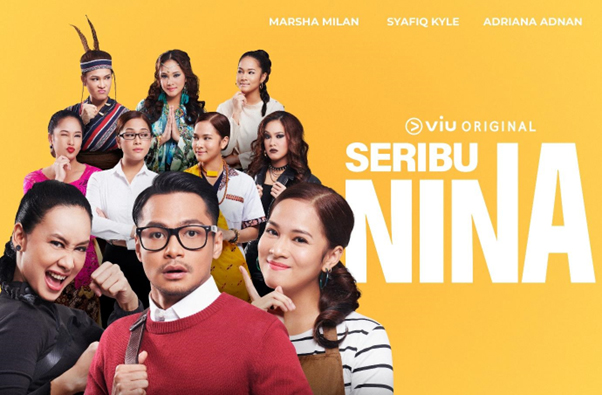 Seribu Nina tells the story of an unorthodox couple: Amar is a strait-laced, meticulous young history lecturer living life with a checklist, and Nina is his cafe barista girlfriend who goes by the motto “You Only Live Once” or “YOLO”. As Amar builds the conviction to ask for Nina’s hand in marriage, an unexpected turn of events takes place. Nina has been concealing the secret of who she really is and is being taken against her will back to her home dimension. At the same time, both Nina and Amar are being hunted down by Didi, a mysterious junior bounty hunter from another parallel dimension.

Amar then embarks on an adventure across a thousand parallel dimensions to find Nina, leading the pair to discover and acknowledge the truth about their feelings for each other while making lifelong friendships along the way with unexpected visitors from out of town. The story depicts an epic journey of self-discovery and relationships in a universe of endless possibilities as our characters learn to embrace fate, take risks and accept each other’s flaws.

Amar is played by Syafiq Kyle, the main actor of the critically acclaimed sensational TV series Nur and winner of the Most Popular TV Actor at the 32nd Anugerah Bintang Popular Berita Harian in 2019. Nina is portrayed by Adriana Adnan, a TV host, model and actress who made her mark in the local entertainment industry through multiple TV series such as Orang Gaji ke-19 and telemovie Jula Juli Bintang Cinta.

Meanwhile, Marsha Milan, winner of the Best Performance award and runner up at the Anugerah Juara Lagu 2022, takes on the role of Didi. As an accomplished host, actor and singer, Marsha has previously been in the Viu Original drama Keluarga Baha Don Seasons 2 and 3 beforehand.

Seribu Nina is directed by Umi Salwana Omar, a renowned local director nominated for Best New Director at the Malaysian Film Festival 2019 alongside the Official Selection Berlin Female Filmmakers Festival 2019. She is known by her peers to be an imaginative director, using her craft to entice audiences of all ages and bring people together.

Viu-ers will be able to watch the series on the Viu app, which is available for free download on App Store, Google Play, and selected smart TVs, as well as on the web at www.viu.com.