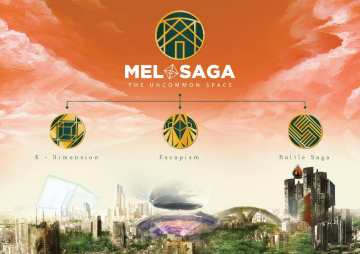 KPOP heavyweights Zico, Crush to headline the concert for the 3-day event

Co-presented by UNC Entertainment and Base Entertainment Asia, the Festival is an essential street  dance and music event on festival lovers’ calendar, and will take place at MINES International  Exhibition & Convention Centre (MIECC), Kuala Lumpur.

Spanning over three days, MELOSAGA comprises of three events which will provide an all encompassing experience that summonses festival lovers to leave their hustle and bustle behind, and  immerse themselves in the whirlwind of music and dance as well as street culture discovery – ESCAPISM; the concert, BATTLESAGA; international and local dance competitions, and K-DIMENSION;  K-Culture Carnival with 100 carnival booths.

K-DIMENSION, the K-Culture component, will be held across all three days to showcase the magic of  K-Culture and K-Pop.

The Phaze International, an international dance showcase competition will take centre stage on the  first day of K-Dimension as the 2023 version wishes to follow the success of the first season in 2022 to  attract dancers from more than 25 countries to compete for a USD 5,000 cash prize and the  opportunity to perform on ESCAPISM as the opening act.

Festivalgoers will also have a chance to join YG Audition for YG Entertainment, the K-Pop mega label  which is best known as the agency behind the successes of BLACKPINK and BIG BANG.

Besides the opportunity to witness YGX, the dance arm of YG Entertainment involving two female  choreographers, Yeo Jin and Jihyo who are BLACKPINK’s backup dancers and also from ‘Street Women  Fighter’ and a male choreographer, Moodok from ‘Street Man Fighter’, K-DIMENSION also provides  opportunities for participants to learn from famous artist choreographers from South Korea at the  YGX Star Workshop.

ESCAPISM is a street music festival that will be held on 14 January featuring K-Pop heavyweights Zico  and Crush among the headliners who will be making their debut appearances in Malaysia, along with  Shigga Shay, YGX, DOLLA, ForceParkBois, DJ Raiden, 3P and many more who are no strangers to  Malaysian music lovers.

The street dance component of the Festival puts together an impressive mix of local and international  dance competitions starting with the RF JAM MALAYSIA QUALIFIER ROUND. Winners from the 4v4  Breaking and 3v3 All-Style will win a sponsored trip to RF JAM 2023 in Vietnam.

On the same day, there will also be a SDACA Championship where international and national all-star  dancers will compete to be the champion of BATTLESAGA.

Dylan Chyo, founder of UNC Entertainment said, “More than just the headliners, MELOSAGA is the  first-of-its-kind street music and dance competitions and carnival in Malaysia, which brings together  an impressive line-up of regional performances, workshops and street culture elements, here at Kuala  Lumpur. Developed as an alcohol-free event, it is suitable for young and old alike.”

Chantal Prudhomme, Chief Executive Officer of Base Entertainment Asia added, “We are thrilled to be  working with UNC Entertainment to present MELOSAGA, a music and dance festival which will  connect entertainment with street culture by bringing established artists and emerging acts, both  regional and local, under one roof.”

Ticket prices for ESCAPISM start at RM259 for basic admission; RM359 for Cat B; RM459 for CAT A; RM559 for Rock Zone. Prices exclude processing fee and transaction charges. There is a 10 percent  Early Bird discount between 8 to 11 December.

Clockenflap Announces Huge First Wave of Artists for March 2023! Arctic Monkeys, Phoenix and Kings of Convenience Among Acts Confirmed to...