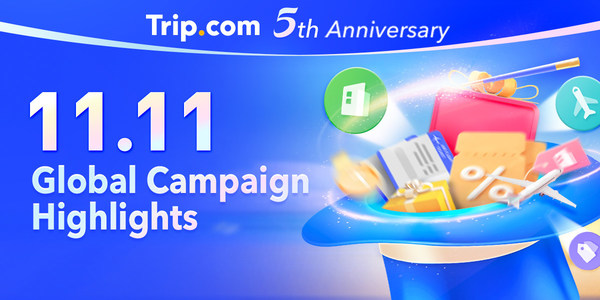 Traffic to Trip.com during the two week promotion for the consumer shopping period around 11th November reached a new high as bookings with the global travel service provider hit a new record, with year-on-year growth surging by 84%.

Markets participating in the campaign across Asia Pacific included Hong Kong, Taiwan, Thailand, Vietnam, Singapore, Malaysia, Japan, Korea, Australia and New Zealand, as well as the UK, Spain, Germany and France in Europe and the US. During the sale campaign, Trip.com saw the average number of bookings rise by 68% and traffic jump by 54% for its available promotion inventory.

Schubert Lou, Trip.com COO, said: “Trip.com has every reason to celebrate its amazing success this year with fantastic take-up of terrific travel bargains across not only Asia Pacific but other regions around the world during our 11.11 campaign.

“The growing popularity of the Trip.com app with our loyal customers shows Trip.com’s journey to deliver brilliant deals to destinations, fantastic flights, hard-to-beat hotel offers and exciting events is continuing to produce results.

“We are sure our Black Friday sale will continue to appeal to cost-conscious customers in the run-up to Christmas as they look to secure a fabulous festive deal.”

Downloads of the Trip.com app also hit a new high during the campaign. On 11th November, Trip.com was the number one app in the free travel app rankings on the Apple App Store and Google Play Store in Hong Kong, Singapore and Thailand.

Han Feng, Head of Performance Marketing at Trip.com, commented: “We continue to see incredible growth in the reach of Trip.com’s all-in-one app offering. Leveraging the incredible deals available across fifteen markets, this campaign we engaged new and existing users to download the Trip.com app thereby maximising the benefits and optimising their experience booking with us.”

The destinations which saw the largest growth during the campaign period were Hong Kong, Tokyo, Bangkok, Osaka, Singapore and Kuala Lumpur, as these popular holiday hotspots welcomed back international travel and tourists.

In Singapore, flash sales released on 11th November jumped by 115% in just 24 hours and those for Universal Studios Singapore, and two ‘Exclusive Ticketing Partnership’ mega events, sold out immediately. This drove attraction products over their four day sale period to soar and show 238% week-on-week growth. Every Daily S$100 Promo Code was also snatched up by eager customers by the end of each campaign day.

Trip.com traffic in Thailand hit record highs with app installs increasing sharply, ranking number one on the Apple App Store and Google Play Store in the Travel app category on 11th November. Whilst bookings on 11th November jumped by 210% year-on-year, as the Trip.com Thailand site saw a record number of visitors.

Following on from the success of this 11.11 global campaign, Trip.com will launch its Black Friday travel deals this week with flight, hotel and train discounts going live for users around the world.

For the past five years, Trip.com has set itself apart by delivering an all-in-one suite of high-quality travel products through its mobile-first channels to users around the world, along with industry-leading customer service.