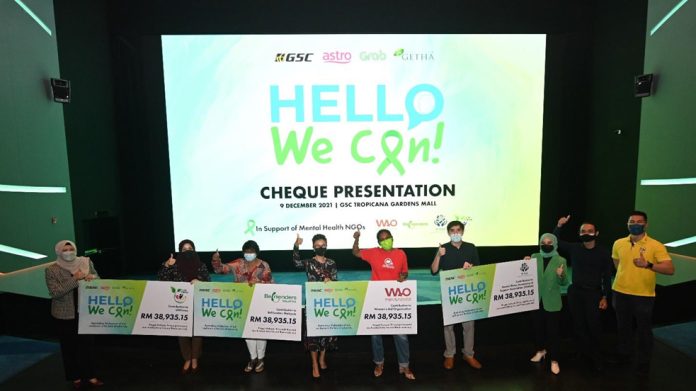 Kuala Lumpur, 9 December 2021 – Golden Screen Cinemas (GSC) today presented four non-governmental and non-profit organisations committed to the betterment of mental health, a total of RM155,740.60 in donations raised from its “Hello, We Can!” campaign. The organisations, Women’s Aid Foundation (WAO), UM Cares, the Mental Illness Awareness and Support Association (MIASA), and Befrienders Malaysia all received an equal sum of RM38,935.15 in support of their initiatives towards raising awareness and providing support for mental health in Malaysia.

An initiative supported by partners Grab, Astro, and Getha, “Hello, We Can!” was a campaign by GSC aimed at inspiring kindness and awareness for mental health. The campaign ran from 28 July to 8 September 2021, where Malaysians were invited to upload positive, motivational postings on social media, including Instagram, Twitter, and TikTok, with GSC pledging RM10 to a donation pool, which would be channelled to the four organisations. Additionally, the public could also contribute directly to the campaign via GrabPay.

On Merdeka Day, a special post aimed at driving more positivity and support from Malaysians invited GSC’s 2 million Facebook fans to share well-wishes and positive vibes with other readers and users, with each comment also seeing an RM10 pledge by GSC to the organisations. The end goal was a successful campaign that not only lifted the spirits of participants across the country, but also raised funds for organisations dedicated to the cause and benefit the underprivileged, needy, and at risk who need mental health care but may have little access or resources to do so.

“The National Council of Befrienders Malaysia (NCOBM) expresses our deepest gratitude to GSC for its generous and heart-warming charity. #HelloWeCan has helped us fundraise donations that are extremely important to sustain our efforts in making a difference to the community. We are grateful and thankful to everyone for all their support,” said Ms. Saras Pillay, President of the National Council of Befrienders Malaysia.

“I am truly humbled and grateful for GSC’s extraordinary commitment to draw attention to the topic of mental health, while empowering the community to be part of the conversation and action. I hope that this campaign is a clear sign to those who are struggling out there, so that they know their voices are heard and help is available when they need it. Together, we can break the barriers of those struggling with their mental health and can provide them help and support that can save lives,” said Puan Anita Abu Bakar, Founder and President of the Mental Illness Awareness & Support Association (MIASA).

Ms. Sumitra Visvanathan, WAO’s Executive Director said, “We are uplifted by the scores of Malaysians who supported #HelloWeCan, which is proof that we can overcome the worst challenges if we stand together and stay positive. The campaign support means WAO’s crisis services can continue to be available to women and children in need and together, we can make Malaysia a better country for women and a stronger nation for all.”

“University Malaya is honoured to be a part of the #HelloWeCan campaign, which was a creative and timely approach to raise awareness among the public on mental health during the pandemic. Donations raised from this campaign will be used to support the #UMeJomChat campaign, our internal campaign aimed at raising mental health awareness among the community, especially UM students. Additionally, it will also assist in the treatment of psychiatric patients at UMMC, as well as support the cafeteria managed by them,” said Dr. Zalfa Laili Hamzah, Deputy Director of UMCares, University Malaya.

Taking #HelloWeCan to the next level

Following the success of “Hello, We Can!”, GSC and the Centre for Mental Health and Wellbeing (CMHW) has recently collaborated to launch the 2nd season of the “My Mind On Film” (MMOF) Youth Mental Health Film Festival. Launched in conjunction with World Mental Health Day on 10 October 2021, MMOF2021 which is themed “Heart and Mind” encourages young filmmakers to produce content that puts the spotlight on mental health and is accepting submissions until 31 December 2021.

This year’s Grand Prize will see the top filmmaker walk away with RM10,000 cash and an opportunity to produce a mental health short film (valued at RM30,000), which will be screened in GSC theatres, with full production support from the exhibitor.

The organisers are committed to making MMOF a shared experience with the continued objectives of inspiring sharing of perspectives and ideas and breaking down the stigma around mental health.  All selected films from the MMOF2020 Virtual Festival can be seen here https://sites.google.com/view/mmof2020-21-virtual-festival/#h.s045awbvswm