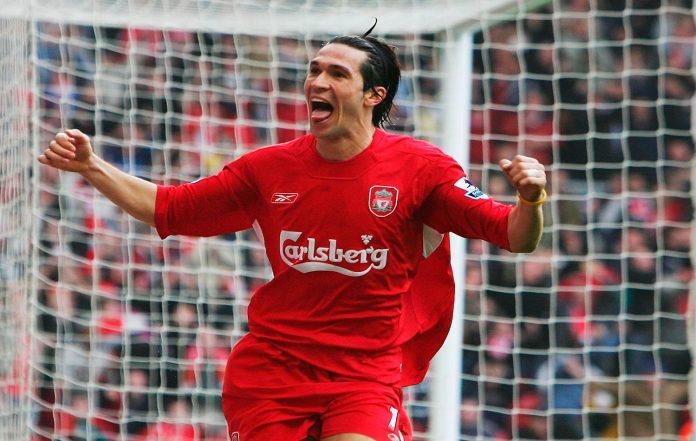 SHAH ALAM, 27 August 2022 – Carlsberg has once again scored high in celebrating and hosting football  punters at an adrenaline-filled football viewing party and autograph session with two Liverpool FC legends in its recent Carlsberg x Liverpool FC LEGENDary Experience held at Plaza Arkadia. Charting its stand as  the beer of choice for every football occasion, Carlsberg had gone the extra mile to deliver on its promise  of bringing the heart and soul of football to life.

With the longest standing partnership in Premier League history, Carlsberg and Liverpool FC celebrate the  spectacular energy of sports and camaraderie in conjunction with its 30th anniversary since 1992. This  milestone was commemorated globally, and in Malaysia, local Liverpool FC fans were awe-struck by the  exciting introduction of the coveted Carlsberg Liverpool FC Legends Edition exclusive 6-can pack, depicting  the jersey designs of six Liverpool FC’s phenomenal icons, who are Ian Rush, John Barnes, Sami Hyypiä,  Robbie Fowler, Jamie Carragher and Luis Garcia.

The Carlsberg x Liverpool FC LEGENDary Experience was an evening memorialised forever. Footies were treated to a slew of activities where they had their face painted, got their airbrush and sticker tattoos of the  club symbols as well as action photos taken at the 360 spin-cam. They also showed off their fancy footwork at the ‘Kicks of Glory’ and ‘Golden Glove’ game stations where winners bagged themselves the Carlsberg  Liverpool FC Legends Edition exclusive 6-can pack and Carlsberg Liverpool FC money-can’t-buy jersey. The  clincher however was the fact that Kopites were given the opportunity to watch a game between Liverpool  FC and Bournemouth FC alongside the team’s legends, Sami Hyypiä and John Barnes, who had once  commanded the roars of fans around the pitch themselves.

“There is something very special about the bonds of football and Carlsberg. Leveraging on Carlsberg’s global partnership with Liverpool FC, we, here in Malaysia, have been looking forward to celebrating our  commitment to football fans by providing the best experiences for every football occasion. Through the Carlsberg Liverpool FC Legends Edition cans, the special appearances of two living legends of the game  and with today’s stadium-replica live football viewing showcase, we are confident that we continue to  animate the passion of football, especially for Liverpool FC fans,” commented Stefano Clini, Managing  Director of Carlsberg Malaysia.

Like every great football party, the evening kicked-off with throngs of fans streaming in early to get ready  for the excitement that was about to hit the big screen. The courtyard of Plaza Arkadia, which reflected a  sea of red, was decked out in true Anfield match-day style with game booths and loads of Liverpool FC  fans clinking their cans of Carlsberg Danish Pilsner and Carlsberg Smooth Draught in the air.

The event soon rolled into high gear with dynamic vocals from SAB A Cappella, which then erupted into  applause and cheers as football icons Sami Hyypiä and John Barnes made their way to the stage.

Carlsberg-cum-Liverpool FC fans then quickly gathered as they were rewarded with a meet and greet and  photo taking session with the LEGENDS before the curtain raised on the first match of the evening.

The atmosphere at Plaza Arkadia replicated a close representation of the football fever that typically  engulfs the stadiums of the Premier League, as Carlsberg continues to deliver the best viewing events in  town with immersive activities, entertainment and matches, ticking all the boxes of a football enthusiast. The getup, such as the overall décor, game stations and locker room replica will also continue to be housed  at Plaza Arkadia from 28 August to 3 September 2022 for football lovers to enjoy.

For those who could not pop over for the recent Carlsberg x Liverpool FC LEGENDary Experience held at  Plaza Arkadia, you can still stand a chance to win the limited-edition keepsake cans when you purchase six  full pints, 10 half pints, two buckets or one tower at your favourite bar or when you spend a minimum of  RM20 at convenience stores or RM30 at super and hypermarkets and 99 Speedmart on either Carlsberg  Danish Pilsner, Carlsberg Smooth Draught or Carlsberg Special Brew.

Consumers can also get the set for free when they buy RM300 worth of Carlsberg Danish Pilsner, Carlsberg  Smooth Draught or Carlsberg Special Brew at super and hypermarkets and 99 Speedmart, official  Carlsberg’s online stores.

For more exciting news keep up to date by visiting www.carlsbergfootball.com. Be sure to ‘Like’ and ‘Follow’  CarlsbergMY on Facebook at www.facebook.com/CarlsbergMY for the latest updates!

And remember, as part of advocating responsible consumption, #CelebrateResponsibly – if you drink, don’t  drive.

LOOK OUT FOR SOMETHING RED AND JOYFUL WITH COOLBLOG’S NEW RED VELVET CHEESE FLAVOURS!