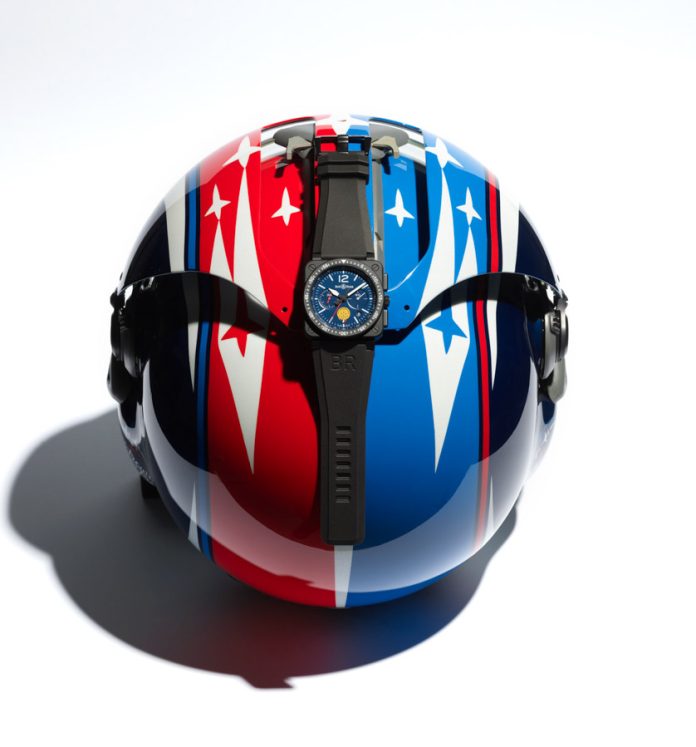 Bell & Ross has always been passionate about military history, design and values. In its quest of excellence, the brand has made aviation, especially aeronautical instruments, its main specialty. Sharing the values of performance and precision, Bell & Ross supports elite units by designing watches that feature specific functions or celebrate special occasions and anniversaries. The brand is proud to see members of these forces and cutting-edge institutions wearing its watches today.

To name a few, the anti-magnetic case of the Type Démineur made it safe to wear during mine-clearing operations. The Pilot Type Aéronavale – with its chronometer and notched bi-directional rotating bezel graduated for 60 minutes – was ideal for fighter pilots during their missions. The photoluminescent indexes and

oversized numerals of the BR 03-92 GIGN, BR 01 RAID and BR 03-92 TORNADO echoed the need for day and night read- ability. With its multifunction movement, the BR 03 Type Aviation fulfills the requirements of French fighter pilots.

Being chosen over the years by many air, land and naval forces is an incomparable recognition of the brand’s technical expertise and the quality of its watches, which are perfect for professional use. By participating in the design and manufacture of professional watches and by serving the most prestigious elite corps, Bell & Ross contributes to history. The year 2021 marks a new milestone for the brand… 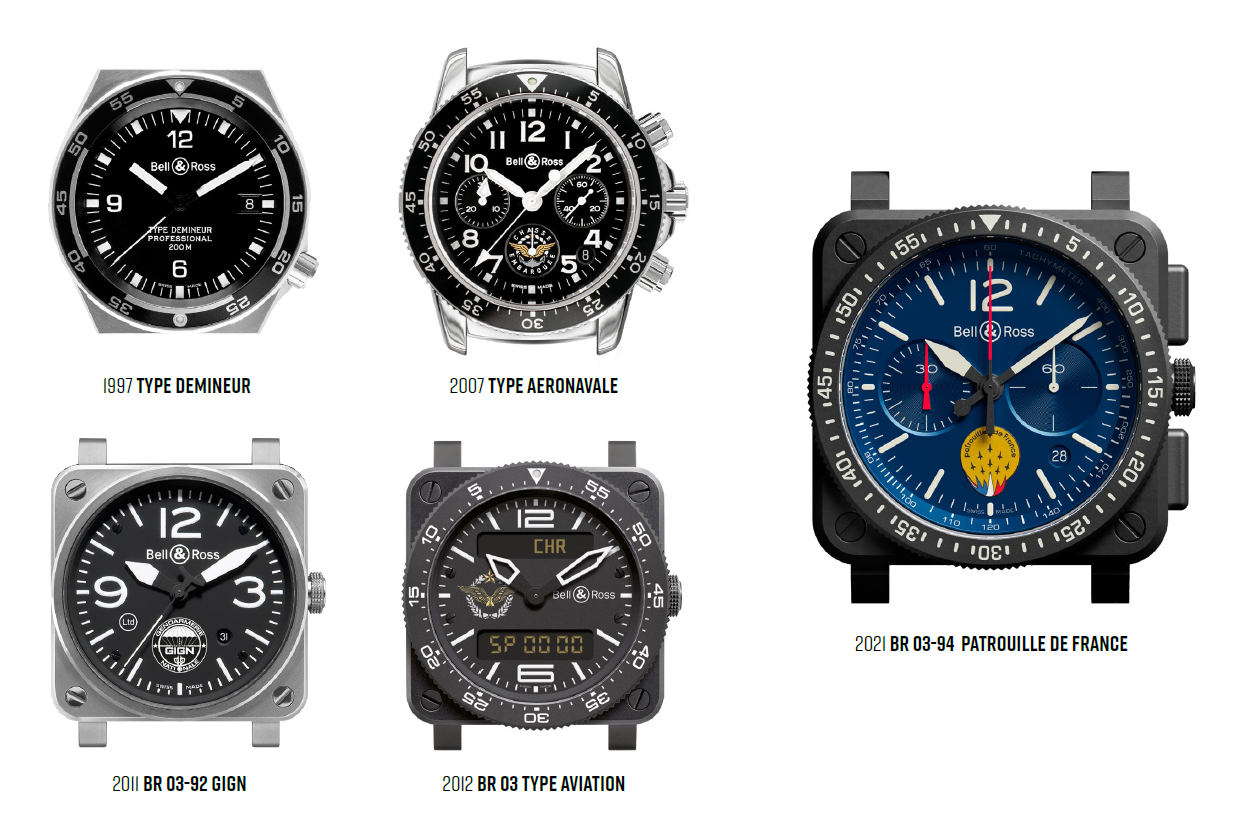 BELL & ROSS EQUIPS THE PILOTS OF THE PATROUILLE DE FRANCE

The reference brand in Aviation watches was chosen by the armée de l’Air et de l’Espace (French Air and Space Force) to become the official watchmaking partner of the patrouille de France.

Patrouille de France is the French Air and Space Force’s official aerobatic display team, created in 1953. Its mission is to represent the French Air and Space force abroad, acting as an ambassador for French aviation and for France itself. Considered as one of the most precise and aesthetic acrobatic flying team in the world, the patrouille de France has flown around the world with grace and elegance for more than 67 years. Every year it continues to impress and move new generations of spectators.

Comprising 9 pilots and 35 engineers, the patrouille de France manages an annual agenda with a military precision approach. Its time is split between winter, which is dedicated to training, and summer which is spent demonstrating at air shows. It traditionally opens the Bastille Day parade in Paris, with nine Alpha Jets. 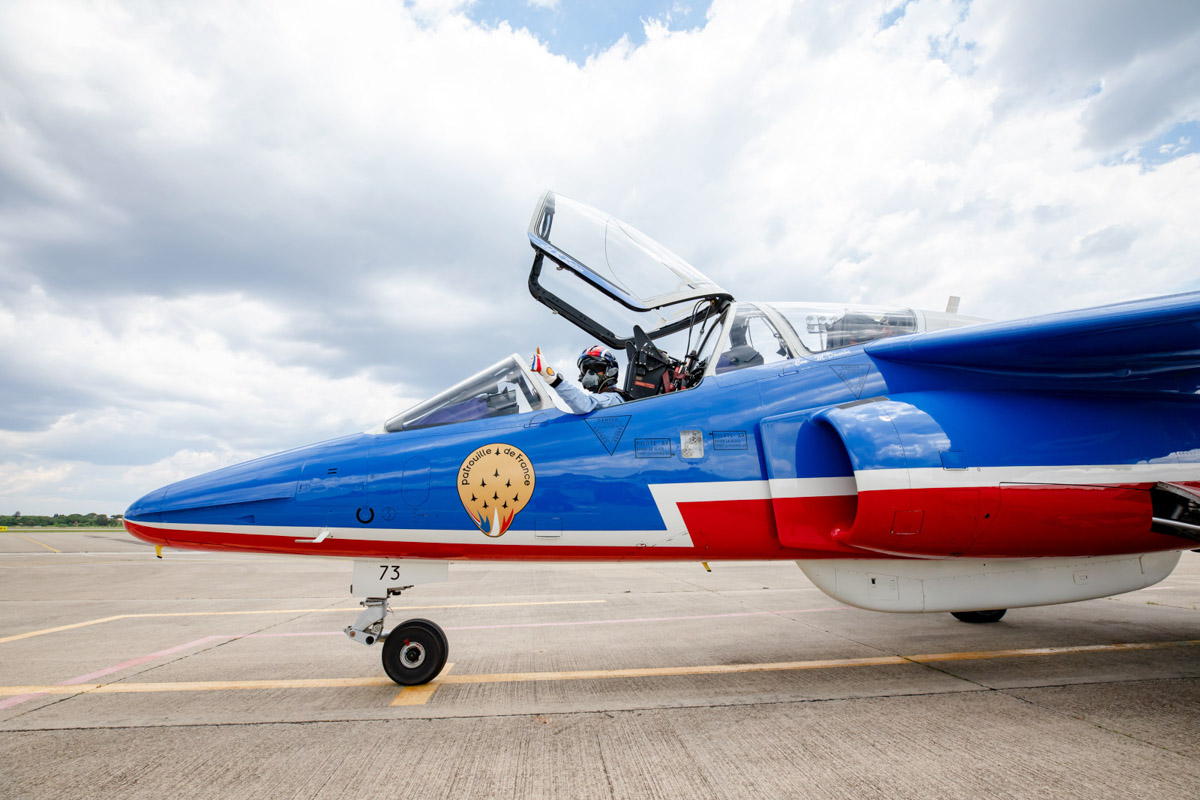 A CHRONO DESIGNED FOR EXTREME FLIGHT

The armed forces’ requirements and specific demands pushed manufacturers to go even further regarding reliability, readability and functionality.

The life as a military or civilian pilot is punctuated by time. During aerial shows, the pilots travel at speeds of between

300 and 800 kilometers per hour and are spaced just two to three meters apart. At these speeds, the slightest error could be fatal. Every second is critical to the pilots. Time is a crucial factor in allowing maneuvers to be executed flawlessly in complete safety. Their watch is the essential tool for piloting and mastering this millimetric time.

Bell & Ross worked closely with the pilots and designed a chronograph which is perfectly adapted to their operational needs, the BR 03-94 PATROUILLE DE FRANCE. 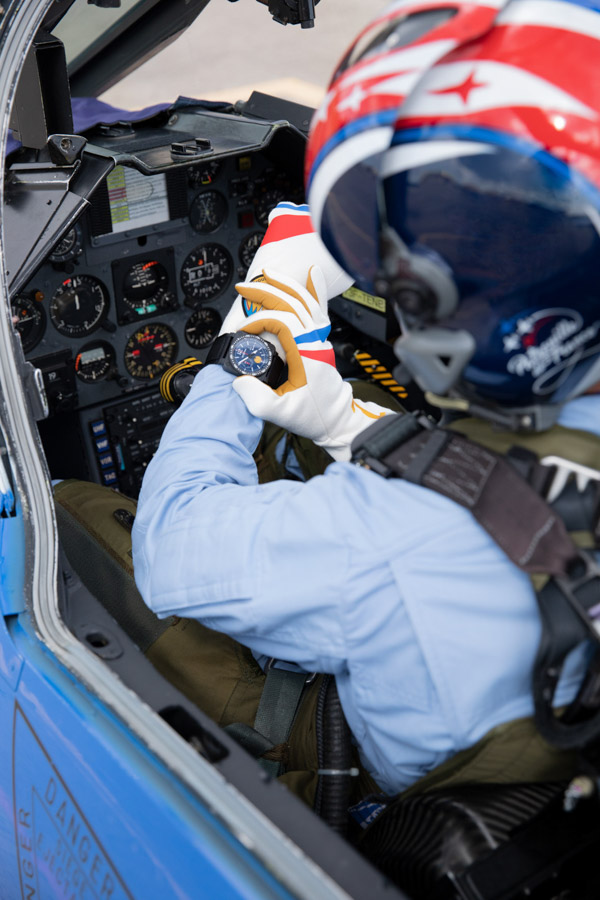 Produced in 500 pieces, this limited-edition is made available to the public. The dial of the BR 03-94 PATROUILLE DE FRANCE proudly and elegantly bears the patrouille de France insignia.

The circle represents the cohesion of the operational unit and its ability to tackle every aspect of a situation.

The gold of the emblem’s background is a color widely used in military insignia.

The tricolor banner which wraps the logo symbolizes the French colored smoke and acrobatic evolutions of the flying team, “ambassador” of the French Air and Space Force.

More than just a logo, this emblem is highly symbolic and depicts the values embodied by the pilots that are accuracy, reliability, discipline, control along with solidarity and humility. In partnering the patrouille de France, Bell & Ross associates itself with these values, and join them as an ambassador for excellence in French aviation.

The patrouille de France logo is printed at the bottom of the dial and also engraved on the case back.

A MEASURING TOOL FOR ELITE PILOTS

Bell & Ross has created both an emblematic and functional watch that meets the specific requirements of patrouille de France pilots: the BR 03-94 PATROUILLE DE FRANCE.

The case for the new BR 03 PATROUILLE DE FRANCE is made of high-tech ceramic. This material holds a privileged position in the aerospace sector, with uses including the manufacture of parts subject to high temperatures, exposure to acids, corrosion, and erosion. It is also found in the design of heat shields and noses for rockets. Almost as tough as a diamond, ceramic is extremely hard-wearing and has an unchanging color as it is dyed in the mass. It is also lighter than steel, hypoallergenic and has thermal control properties, which increase the wearer’s comfort.

The BR 03-94 PATROUILLE DE FRANCE houses a mechanical chronograph movement with automatic winding which offers tried-and-tested reliability. Available to the public, an identical limited to 100 pieces quartz edition version of this watch will outfit the patrouille de France flying team.

When on their mission, time measurement is the determining parameter. As an essential tool in aerial navigation for measuring short time periods, the chronograph is the main complication of aviation. It is equipped with a bi-directional bezel with a 60-minute scale to mark intervals in time.

Synchronization is fundamental for these pilots especially when, they chain together several scenes with 2, 4, 6 or 8 jets. Their safety and quality of the show rely on that. Having generally, eight pilots sometimes nine flying as one at over 600km/h, subjected to accelerations exceeding 6g, precision must be ab- solute. It is the same for their watches. Thought for an optimal readability of the pilot while flying, the chronograph seconds hand features in the centre of the dial which is the most important time measurement tool. 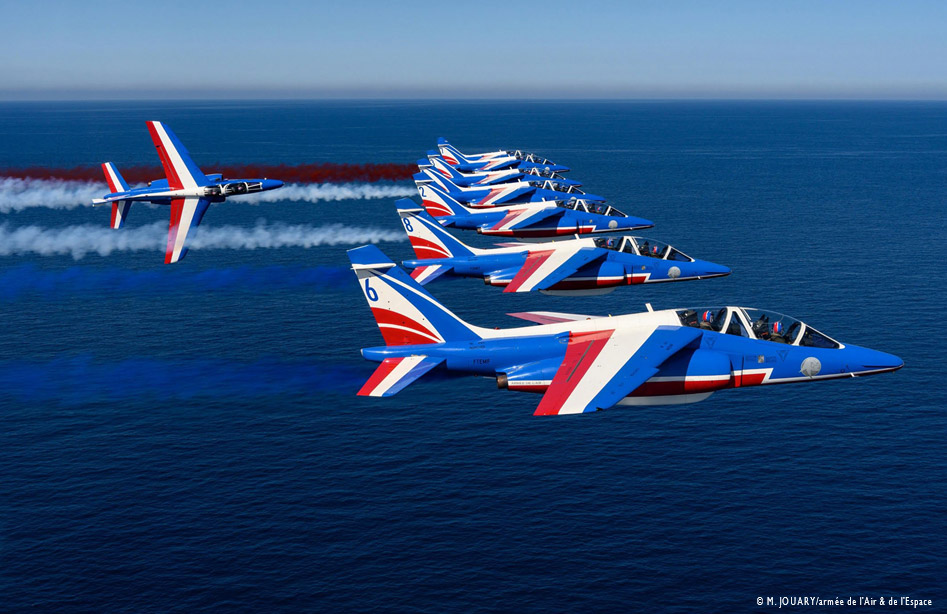 The new chronograph timepiece is both a tool and an icon. By adopting the distinctive design features of this iconic French acrobatic patrol, the BR 03-94 PATROUILLE DE FRANCE asserts a strong identity from the very first glance.

Precision and legibility are the two key criteria for the pilots. The colors used on the dial provides a visual contrast to offer optimal readability.

At 600 km/h each second counts. Each of them must be iden- tified rapidly. To enhance its legibility, the hands used for the chronograph functions are distinguished by red tips. In avia- tion, this is the one of the colors of essential features and test

flights, known for its frank, clear and dynamic properties. The dark blue dial echoes the color of the sky as well as the patrol’s color identity.

The numerals, indexes and hands are white and photo-luminescent to ensure perfect visibility both day and night. Designed for a professional use, the insignia was placed on the dial, so it does not disturb the readability. This logo also features on their dashboards’ plane. Pilots use their watches mainly during the ground phases until take-off. The BR 03-94 PATROUILLE DE FRANCE is equipped with a black natural rubber strap. In the summer, rubber is the ideal material to preserve the wrists of pilots throughout the season.