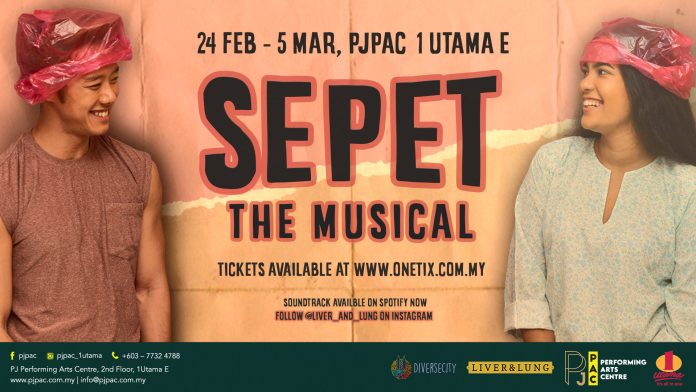 In 2020, the musical was celebrated at the Cammies with multiple awards and nominations. In 2021, responding to popular demand and with support from CENDANA, Liver & Lung released the musical’s soundtrack on Spotify for fans to enjoy.

This year, with hopes that Malaysians will be able to celebrate live theatre again, Liver & Lung are reviving Sepet The Musical with a bigger and better proposition. From the 24th of February 2022 onwards, with support from the Ministry of Tourism and KL DiverseCity, Jason and Orked are returning on stage at the Petaling Jaya Performing Arts Center. The musical is a proud collaboration between Liver & Lung and PJPAC as it is the venue’s debut professional musical.

Audiences can expect Jason and Orked to sing new songs, penned by Liver & Lung co-founder Shafeeq Shajahan and collaborator Badrish. Irena Taib from local folk indie-band The Impatient Sisters brings a bigger sound to the musical, with new instruments and arrangements. Jason and Orked will be played by musical theatre superstars Joshua Anthony and Badrika Baluch.

Fans are in for a treat. Liver & Lung have worked hard to maintain the immersive, nostalgic and magical atmosphere of their previous production, while also scaling up the show and adding in new surprises for returning and new audiences alike.

The musical was directed and adapted by Shafeeq Shajahan, who won the BOH Cameronian Arts Award for Best Direction. “There is something special about what Yasmin Ahmad left behind for us. Over the years, we have been honoured to pay homage to her iconic film,” he said. “We continuously see people from all walks of life come and watch the show and they always take something away from it,” he added.

The MCO restrictions have made it challenging for artists to keep afloat.

“Malaysian musical theatre is thriving. The pandemic may have slowed us down but I am confident that we have the ability to move the world with Malaysian-made music,” said Badrish.

Liver & Lung is an award-winning, international production company founded by best friends, Shafeeq Shajahan and Hannah Shields. After winning three awards at the BOH Cameronian Arts Awards 2020 and launching Kuala Lumpur’s first integrated digital arts festival, KloudFest in 2021, Liver & Lung has been committed to upholding the arts despite the challenges posed by the pandemic. This release marks their second project for 2022.

Tickets for Sepet The Musical sell out extremely quickly, so audiences are encouraged to purchase tickets as soon as possible here. Viewers can also subscribe to Liver & Lung’s YouTube channel for more content, listen to the Sepet The Musical soundtrack here or watch its trailer here.