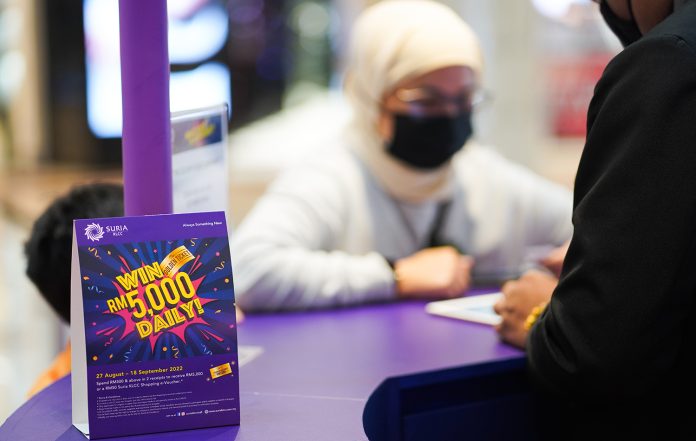 Kuala Lumpur, 1 September 2022 — From now until 18 September 2022, two  RM5,000 shopping vouchers are up for grabs every day during The Golden Ticket  campaign at Suria KLCC.

The campaign is back for the third year after two successful runs in 2020 and 2021.  Shoppers who spend RM500 and above in two receipts at any specialty stores stand  a chance to win a lucky Golden Ticket (worth RM5,000). This ticket is found in one of  the 100 mystery boxes showcased at the Centre Court. The best thing about this draw  is even if shoppers do not win the Golden Ticket, they are still rewarded with a Purple  Ticket (worth RM50) found in the remaining boxes!

Winners of The Golden Ticket get to celebrate with a photo opportunity at The Wall of  Winners. They will also get their share of fame by being featured on a rotating screen  in the Centre Court.

Every day, there are two lucky draw sessions — the first is from 10 am to 2 pm and  the second is from 5 pm to 9 pm — with each session adding 100 new tickets for  shoppers to snag. In addition, any remaining tickets that were not drawn will snowball  to the next day.

Each shopper is limited to one draw per day. The draw must also be made on the same  day of receipt purchase.

Days leading up to the campaign, Suria KLCC mobile trucks have been bringing the ‘Golden Ticket on the Move’ to people around KL City and Ampang, giving them a  sneak peek at what’s to come. The mystery boxes in this mini draw contained Purple  Tickets worth RM10 and Golden Tickets worth RM50.

“Following the success of The Golden Ticket campaign in previous years, we take  great pleasure in bringing back the joy and excitement of these lucky draws to our loyal  customers. This campaign is much loved for its terrific rewards where everyone is  guaranteed to walk away a winner!

“With the pandemic easing, we also hope our efforts will greatly benefit our tenants  and spur further commercial growth as we enter the last quarter of 2022,” said Andrew  Brien, CEO of Suria KLCC Sdn Bhd.