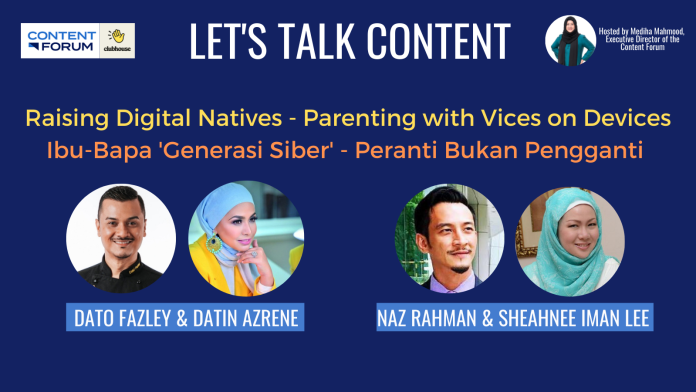 KUALA LUMPUR, 7 DECEMBER 2021 – In this technological day and age where social and digital platforms take centre stage, it is more crucial than ever for parents of digital natives to empower their children and inculcate self-regulation. As the virtual platform fast becomes a space that provides endless entertainment and edutainment for children as young as two as well as a social platform for older children, it is pivotal for parents to protect them from harmful content, menacing predators and other online dangers.

Sharing their experiences and parenting styles on Clubhouse were four parents of digital natives who spoke about what it’s like to be a parent and its challenges in this digital era. Titled ‘Raising Digital Natives – Parenting with Vices on Devices’, parents Dato’ Fazley Yaakob – Datin Azrene Ahmad and Nazrudin Habibur Rahman – Sheahnee Iman Lee shared their different approaches to parenting when it came to gadgets, social media and the digital space. It was moderated by Content Forum’s Executive Director Mediha Mahmood.

“All our kids are now on social media, including TikTok. My husband Fazley actually keeps a list of all their passwords and we also follow them on their social media accounts so we can keep tabs on their social media activity. If we see any posts that are dark or alarming, we will talk with them about it. We have open chats about everything so they don’t feel the need to go behind our backs to do things to satisfy their curiosity,” said Azrene, who added that there are also apps that parents can use to control a child’s internet usage and that parents have to be more tech-savvy as compared to parents in the past.

Azrene and her husband also shared about online predators who lurk and find ways to reach out to children, giving an example of a harmless online game where players had to enter random rooms to play. There was one room where paedophiles were lying in wait to groom children, starting by being their friend, playing games with them and then asking for personal information like photos, phone numbers and so on. The situation came to light when they watched their son play the game and a predator appeared and made contact.

“It was very scary. They would entice children with game items and ask the character played by the children to dress up in undergarments and then strip down. On another messaging platform, the same person from the previous online game was also seen trying to contact my son. When we learned about how these predators were manipulating the game to target children, we got our boys to delete their accounts, which made them furious but we sat them down for a few weeks and went through the rules and regulations and talked them through the dangers of it all, so they are much safer players now,” said Fazley.

Meanwhile parents Sheahnee and Nazrudin, has a different parenting style where they do not allow their children any unsupervised access to connected devices and no access to social media. However, they too believe that no matter how uncomfortable the conversation can be about certain sensitive or harmful content online, it’s necessary to have it. “When we were kids, adult content was not easy to access. Now, access is made much easier. Whether or not I’m ready to do it, I have to have these conversations because chances are, my children would have already heard about it,” said Sheahnee.

She gave an example of the popular Korean series Squid Game, where some parents she knew initially had no idea what the series was about then panicked upon finding out that it was for mature audiences only but their children had already watched all 9 episodes. “Imagine having to explain all those themes to the kids, and these kids were mostly in Standard 1,” she said. “If we want to give our kids the freedom to do certain things online, then we must be prepared to be one step ahead of them at all times, keep up to date with all of the risks that are presently online, do all the research and be prepared have difficult conversations with them,” she added.

Her husband, Nazrudin, added that with all the online classes going on recently, their children also stumbled upon free games, which partly came from random links their friends sent. “And those links require you to register to get extras for the games they play, so they innocently put in their email addresses and the next thing you know, there are deleted links in the trash which contains adult content and other harmful material. I was then having conversations I never thought I’d have with my children at such a young age,” he said. “At this day and age, the hardest thing that our kids have to do is to be mature and make mature decisions before they are even mature. So, opening the channels of communication with your children and having that trust is very important,” he added.

All of them agreed that parents nowadays should be more open with their children, educate them about the online environment and avoid being judgmental as it may push them away. It is also imperative as parents to always remember that there really is no right or wrong way to parent digital natives because everyone is learning as they go and making mistakes is just part and parcel of this age of information and misinformation.

“Although both parenting styles are different, what these parents have in common are attentiveness, vigilance and an open communication channel with their children. We can never be too safe and at the same time it is almost impossible for us to monitor our child’s every single online activity. So, it is crucial to keep ourselves educated about the dangers out there and educate children about self-regulation and encourage them to exercise it at all times,” said Mediha.

A useful resource for self-regulation is the Malaysian Communications and Multimedia Content Code (Content Code). Drawn up by the Content Forum in 2004, the Content Code is a set of guidelines outlining best practices and ethical standards for content creation and consumption across all digital media platforms.

Mediha added that the Content Forum is currently in the midst of conducting a nationwide public consultation exercise, aimed at gathering feedback from members of the public on proposed revisions to the Content Code, which includes new provisions that seeks to enhance the rights of children and also encourage online service providers to take both proactive and reactive measures when addressing prohibited material or activity online.

Members of the public are encouraged to provide feedback on this public consultation to ensure that Content Code version 2021 takes into account consumer’s current needs and concerns. Further information on this exercise can be accessed at www.contentforum.my.