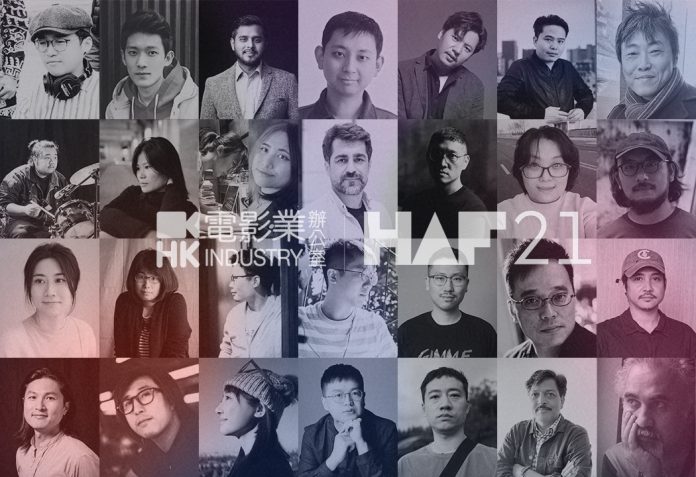 HAF21 will take place as a physical, in-person event for the first time since 2019 from 13 – 15 March  at the Hong Kong Convention & Exhibition Centre in conjunction with the 27th Hong Kong Film & TV  Market (FILMART).

The 28 projects, covering a potpourri of genres – horror, fantasy, romance, family drama and  animation, are shortlisted from 244 submissions from 38 countries and regions. They include  seven projects from Hong Kong and eight that passed through HAF Film Lab. Alongside projects  from acclaimed filmmakers and producers such as Arsalan AMIRI, Anthony CHEN, Fruit CHAN,  Jakrawal NILTHAMRONG, LIN Yu-Hsien, NAI An, Nader SAEIVAR, Teddy Robin, and TIAN Zhuangzhuang are also 14 by budding first-time directors.

“We look forward to welcoming back filmmakers, industry guests, and friends from the trade media  after three virtual editions of the HAF,” HKIFFS Industry Office Director Jacob WONG said. “And  HAF21 will again showcase itself as an invaluable platform for new talents and upcoming projects  from Asia.”

HAF21 will announce its work-in-progress (WIP) shortlist after the Chinese New Year.

They include the winners of the fifth Film Lab’s three script service awards: TANG Peiyan‘s A  Better Tomorrow, a coming-of-age drama produced by Anthony CHEN (Ilo Ilo); Frankie LEE‘s  Kapok, a drama about a woman burdened by work and family duties who returns to her hometown  to find solace, to be produced by Fruit CHAN (Three Husbands); and The Only Way Out directed by  YEUNG Leung-chuen and produced by Jun LI (Drifting), about five lost souls in search of a way out.

Other Film Lab alumni include Hugo in the Pigpen by SHEN Sheng-Ting and SHIH Jing-Ting, a  Taiwan-US co-production about a boy who raises a pig with a human body; GUAN Tian‘s The  Poison Cat, produced by YANG Chao (Crosscurrent), is about an enslaved woman whose fate  entwines with an evil spirit; FAN Ka-chun‘s Stair-away, produced by Teddy Robin (The First Girl I  Loved), revolves around a courier, a father searching for his lost son, and the missing head of a girl’s  corpse; and The Walking Bird by ZHANG Hanyi (HKIFF40 Firebird Award winner with Life After  Life) follows two siblings on a bird hunting adventure.

“We are delighted to bring these projects from Film Lab to the developmental stages within our  HAF ecosystem,” Jacob WONG said.

In The Fruit, produced by Marco MÜ LLER, former festival director of Venice, Locarno and Pingyao,  director LI Dongmei (Mama, The Ingmar Bergman International Debut Award of the Göteborg Film  Festival) tracks the joy and sadness of a woman through pregnancy and miscarriage. In The Last  Haven, producer-turned-director ZHANG Jun follows a woman moving back in with her parents  after a divorce, only to open old wounds. ZHANG Lu (Yanagawa) produces.

Based on a novel by the late LEE Wei-Jing, The Mermaid’s Tale by Norris WONG (My Prince  Edward, Hong Kong Film Awards Best New Director winner) is about a woman searching for a  perfect ballroom dancing partner. While ZHAO Jin‘s directorial debut, Non-fiction Stories, adapted  from WANG Zhanhei’s novel, examines the hardship of the young working class through the life of a  delivery rider. NAI An (The Shadow Play) produces.

A Divorce by Jevons AU (Trivisa) looks at how a fake divorce turns real when love and trust  disappear. Family of Crooks by LAI Kuo-An (whose A Fish Out of Water world premiered in  Toronto) is about a family of street opera troupe feigning madness in an insurance scam. The  Marriage Drive by Lawrence KAN, produced by industry veteran Cora YIM, tells the story of a  couple’s marriage spanning over a decade. In ZHANG Yuxuan‘s China-Thailand-France co production, Till Forgetfulness Do Us Part, two estranged lovers travel to Thailand to start over.  Meanwhile, China’s Fifth Generation great TIAN Zhuangzhuang (The Horse Thief) joins HE Bin (The  Crossing) in producing Phakpa‘s Dark Eyes, a tale of first love between a Buddhist monk and a  young blind girl that transcends beliefs.

Several non-Chinese language projects, including two featuring resilient elderly women, are also in  the mix. In White Snow by Praveen MORCHHALE (Walking with the Wind, winner at India’s  National Film Awards), an old woman embarks on an arduous journey to remote villages to show  her imprisoned son’s banned film. While in The Witness by Nader SAEIVAR (a co-writer of Jafar  PANAHI’s 3 Faces and director of No End, which premiered in Busan), a widow refuses to succumb  to political pressure in Iran and publicises everything she knows about a murder.

Pre-teens play the protagonists of Bhunte by Bikas NEUPANE, about a poor village boy in Nepal  who dreams of getting a football. In Nagahama (working title) by TANIGUCHI Mio (Hiko and  Vega, Grand Prize winner at Aichi International Women’s Film Festival), the friendship of a half Japanese boy and a boyish Japanese girl leads up to the traditional Nagahama Hikiyama Festival.

Skin Coat, the only animated project in the HAF21 line-up produced by Anthony CHEN for TAN  Wei Keong, depicts a man donning a woman’s skin coat to enter his male lover’s village to meet his  parents. In Rhizome, a Thailand-Laos-France co-production by Jakrawal NILTHAMRONG (Tokyo  FILMeX Grand Prize winner Anatomy of Time), a Hmong woman who returns to Laos to become a  deminer and develops intimate feelings for a Laotian volunteer.

HAF21 guest registration is now open to investors, festival programmers and other industry  professionals through https://Industry.hkiff.org.hk/guest-registration. Once accredited, all guests  can schedule one-on-one meetings with filmmakers to discuss their projects.

Please refer to the Appendix for details on all shortlisted in-development projects. For more up-to date information about HAF21, please visit our official website at https://Industry.hkiff.org.hk or  our Facebook page at https://www.facebook.com/hkiffindustry/.

Some Milestones for HAF Projects in 2022