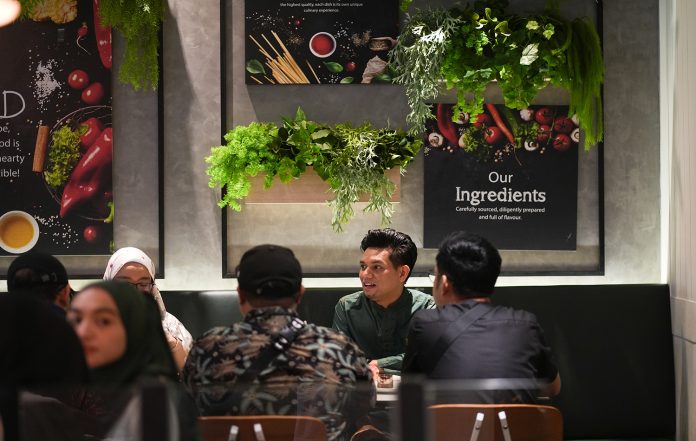 Alamanda team then brought the children to shop for a pair of kasut raya and a suit of baju  raya. The children were then led to the Centre Court where the mall has recreated a kampung scene à la “Raya at Atuk’s Orchard” and entertained with a Hari Raya Zapin performance.

The event was made more meaningful when Alamanda’s retail partners also contributed Hari  Raya goodies to the children. After her welcome speech, Pang was accompanied by  Alamanda’s retail partners such as Gene Martino, Qutn Cotton and Dunkin’ Donuts whereby  the children were presented with duit raya and a suit of baju raya from Gene Martino, another  suit of baju raya from Qutn Cotton and boxes of doughnuts from Dunkin’ Donuts.

During iftar, the children were beaming because they were allowed to pick anything they  wanted from the menu at Secret Recipe.

Andrew Brien, Executive Director of Suria KLCC Sdn Bhd said, “Being the only mall in  Putrajaya, we recognise the need to play a vital role in actively engaging and supporting the  community, especially children in need. As wonderful as it is to be with friends and family  during this festivity, we must also remember that not many have this privilege. In view of this,  we are pleased to share the joy of Hari Raya with the children of Rumah Bakti Al-Kausar.”

The Rumah Bakti Al-Kausar Chairman, Haji Razali Haji Basri said, “As the guardian of the  children, we are grateful to Alamanda Shopping Centre for bringing so much joy to the children  and giving them the opportunity to welcome the month of Syawal with happiness. The  contribution is indeed helpful and it touches my heart to witness the delight and excitement on  their faces.”

Rumah Bakti Al-Kausar is a charity home founded in 2011 that provides shelter to kids who  are in need particularly the orphans. The home is currently housing 36 children.

WIN A TRIP TO MANILA, PHILIPPINES WITH WATSONS BRAND Watsons Members Stand a Chance to Experience a 4D3N Trip Because It’s More Fun...

DISCOVER THE JOYS OF SUSTAINABLE SHOPPING AT PAVILION BUKIT JALIL