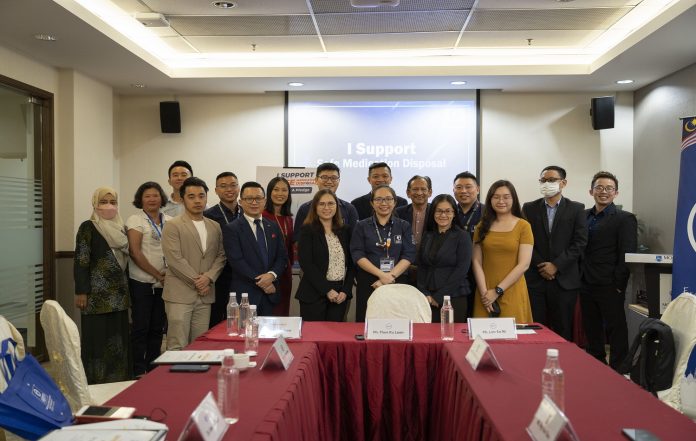 Selangor, 5 January 2023 – Malaysia is highly dependent on its water sources, with 99% of the water supply for domestic use deriving from surface water such as streams and rivers. The World Economic Forum’s research has shown that the concentration of pharmaceuticals in waterways is reaching dangerous levels, and is detrimental to human health and the world’s ability to deliver on the UN Sustainable Development Goal to provide clean drinking water and sanitation for all by 2030.

The roundtable participants were:

Ms Foon Hwei Foong from Malaysian Community Pharmacy Guild recalled that about 15 years ago, prior to proper disposal systems and awareness of the serious implications caused by drugs, crushing the medication and flushing down the toilet were considered normal disposal behaviour among patients and consumers. However, she highlighted that unwanted medication that has been disposed on landfills are reabsorbed by water streams and eventually leads back to the water we drink. She posed the question “Imagine if it were psychotropic drugs which end up in our water systems?”

In response, Dr Saw Pui San, a lecturer from Monash University Malaysia’s School of Pharmacy, brought up example of reports of contraceptive medicine which have been irresponsibly discarded causing sterilisation of fishes in the ecosystem. She also emphasised that antibiotics are strictly regulated prescription medication, and many efforts were made to prevent antibiotic resistance with initiatives to educate the public on responsible use of antibiotics. However, for antibiotics that were leaked into water systems, it could also be causing our resistance to antibiotics as well.

Mr Amrahi Bin Buang, President of Malaysian Pharmacists Society echoed that in terms of regulations and practice in Malaysia, the laws and policies are in place across all access points of medication distribution. He opined that a lot has been done in terms of policies, beginning with The Malaysian National Medicines Policy (MNPP) which has clearly stated the measurements and governance in place for medication safety. Mr Amrahi continued to clarify that ultimately, the problem circles back to being educated in health and medication literacy which is lacking within the population, and to educate the public, the industry needs a medium to act as an educator for the public.

On this note, Mr Amrahi pointed out that pharmacists have to be at the forefront as guardians of medicine. Instead of working in silos, community pharmacists are strongly encouraged to start working collaboratively not just among one another but also with the industries in the ecosystem as a whole to educate, implement and practice safe medication disposal throughout. Mr Amrahi emphasised saying “Pharmacy is the Health hub of the community and pharmacist are the most accessible health care provider”.

Mr Ostwin Paw, CEO of Alpro Foundation concurred that in addition to understanding what constitutes as unused or excess medicine, it is imperative for leaders in the industry to kickstart the conversation on the impact and risks of unsafe medication disposal methods on the environment. He explained that the foundation explored comparatively how other countries were implementing their versions of preventive measures and how locally, the industry could all play a part in adopting safer medication disposal practices in Malaysia moving forward.

Representatives from pharmaceutical companies, Mr David Lin, Communications and Government Affairs Director of GSK, Mr Alvin Seah General Manager for Ethical Classic Business of Duopharma, and Ms Ng Yew Thin, Associate Director Pharmacy & Consumer Health of Menarini collective agree that all stakeholders, from the top of the value chain to the bottom should be working together and sharing the load and responsibility as opposed to working in individual silos.

Mr David Lin, briefly mentioned that from an ESG (Environmental, Social and Governance) perspective, GSK is fully committed to its initiatives, starting from the top of the value chain down to the bottom. Mr Alvin Seah on the other hand, has stated that from the manufacturing side, pharmaceutical manufacturers must comply to strict regulations, standards, and procedures. In agreement with Mr David Lin, he has mentioned that the movement for mediation safety disposal is more effective when distributed across different stakeholders and parties, not just confined to community pharmacies whereas Ms Ng Yew Thin, opined that doing it together means starting with education as a key touchpoint in getting end consumers to begin working with the industry to handle this problem in unison.

Ms Lim En Ni, Alpro Pharmacy’s Chief Pharmacist followed up by explaining that Alpro Pharmacy has started its efforts on Safe Medication Disposal in 2021 in a joint effort with Johnson & Johnson, GSK, Duopharma, Bayer, Viatris and Menarini. To date, the initiative has safely disposed more than 1,000kg of medication waste. In addition, the campaign had garnered more than 100,000 signatures from the community pledging support for Alpro, within three months since July, 2022.

“We launched the Safe Medication Disposal Campaign, by placing dedicated medication disposal bins at all our Alpro outlets nationwide to collect excess medicines to be disposed ethically without polluting the environment. One year on, it is our pleasure to announce that from January 2023, we would be able to collect all types of inhalers at our disposal bins as well.

However, our sustainability initiative with this program was more than just placing medication disposal bins. As a certified member of the United Nations Global Compact (UNGC), Alpro has been advocating and campaigning for safe medication disposal practices with the community and its stakeholders throughout the year, gaining inclining support and pledges from all parties.

We are honoured to host this roundtable discussion with a distinguished line up of industry leaders as panellists. The input generated from various perspectives are well-aligned with a singular vision for the country. Ultimately, our collective goal is to understand our roles in this nationwide safe medication disposal network and pioneer a cleaner, safer, sustainable, and systematic approach to dispose unused medicines on a larger scale together.

We had a fruitful outcome and would like to thank the panellists and attendees for participating. We look forward to more programs such as this in the future, to propel the conversation further.” Ph. Lim concluded.